This Zootopia post is part of all expenses paid trip to Los Angeles, but all voice acting talent is my own

Though, I’ve been to the Disney Toon lot a few times before, this was my first time ever getting to see the recording studio. Let alone be allowed to go inside and record something myself.

While we were chatting with Paul, we got to hear about what it takes to be a voice actor. Each and every single line is read multiple times, and actors usually record for four to five hour sessions. That’s right before it’s completed each actor has literally said the script four or five times, and that’s if the first round of takes is good enough! Sometimes it takes even longer. 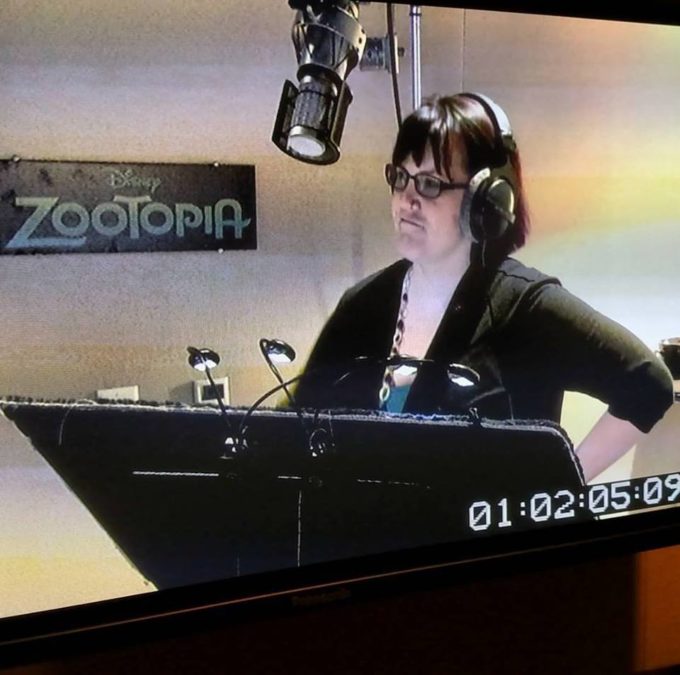 Me looking all serious as I let my inner Mr. Big out!

All this recording is done in bits and pieces and it can take months and even sometimes years for all the recording to be done. It was really neat to hear just how much goes into it, in the past I’ve interviewed voice actress Ginnifer Goodwin for Tinkerbell and the Legend and the Neverbeast. She told us a little bit about voice acting, but it’s neat to hear about it from the mixer because Ginnifer is the voice of Judy Hopps in Zootopia as well! (Go, Jennifer, Go)

After chatting with Paul, it was my turn to hit the recording studio! I decided to voice the scene with Mr. Big and his daughter, Fru Frui. Mr. Big may be an artic shrew, but he’s not afraid to ice anyone that gets in his way even if it is on the day of his daughter’s wedding. Check me out!

It was such a fun experience being able to hop in the recording booth to see what it takes to be a voice actor. Maybe in Disney’s next animated film they’ll see the mad skills I have and hire me for their new big box office hit!

Until then, make sure to check out all of Zootopia, which is now out on Blu-Ray and DVD! You can buy Zootopia on BluRay and DVD here!