Ford flew me out to this kick ass event, but all opnions car drooling, technology swooning, and witty commentary are my own.

This week was a week filled with hot cars, amazing technology, and lots of surprises at the 2015 Auto Show in Detroit, Mi. Ford, awesome as always, flew me out to Detroit to check out the North American International Auto show and what secrets lurked beneath the hood for Ford this year.

Funny story. Things have been CRAZY at our house all holiday season. When I was invited, I was really excited to be headed back to work with Ford, but I figured this trip was kinda like the Ford Trends Conference that I attended last year. It wasn’t until a few days before my trip that I ventured to look at the itinerary and see what awesomeness lay in store. 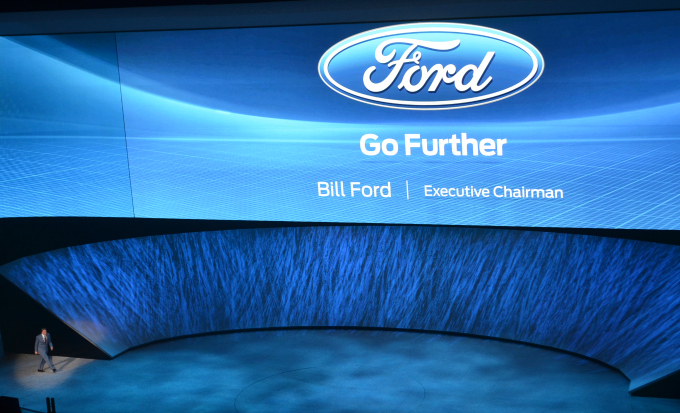 My husband gave me the biggest crap about this. Imagine me sitting on the coach, turns to the hubby “Oh cool, this is a whole huge car show. There are going to be ALL sorts of brands there. ” His jaw hits the floor, his eyes wide with shock, and all he could utter is “YOU. ARE. NO. LONGER. ALLOWED. TO. GO.” He was kidding of course, well maybe, but was basically saying my cool car chick card was revoked. Needless to say, I may have lost a little bit of credibility with him that day, but still I was going he was not neh, neh, neh.

The North American International Auto Show is THE show to attend in the car industry in North America. People come from all over the world, duh it’s “INTERNATIONAL”, and it was really cool hearing all the different languages and accents at the event. Needless to say, I can’t wait for you to see the coolness at the show!

The first day in Detroit, Ford hosted us at the historic Piquette factory. The Piquette Factory is the birthplace of the Ford Model T, which opened it’s doors in 1904. The building exudes history.  It’s a beautiful plant located near Downtown Detroit. We had the honor of hearing Ford Futurist Sheryl Connelly and Ford Archivist Dean Weber talk about the roots of Ford, and a brief look into the future of where the company sees itself leading the way in the future. 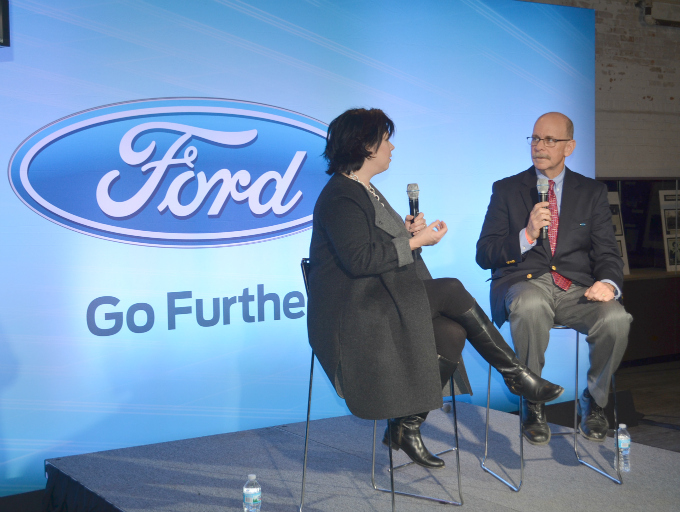 The building is steeped in history, and we had the honor of viewing some of the original Ford vehicles including a super secret room in the back that you have to swear a blood oath to see (ok, totally kidding about that part). We were able to actually get in an Old Tin Lizzie (aka the Model T) which was super neat, and check out some of the other models in the museum. 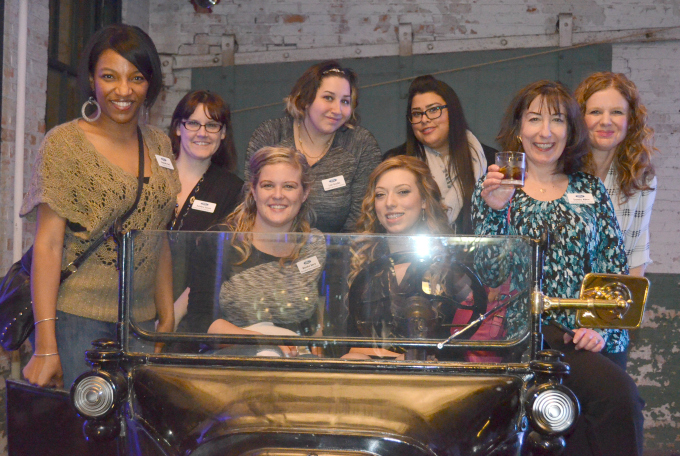 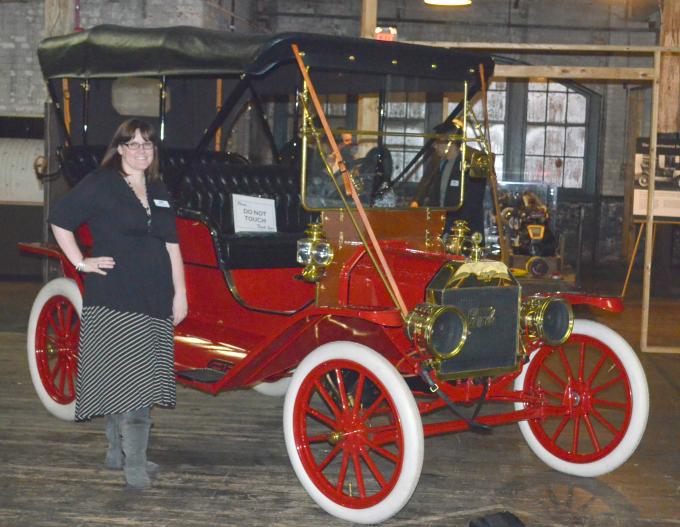 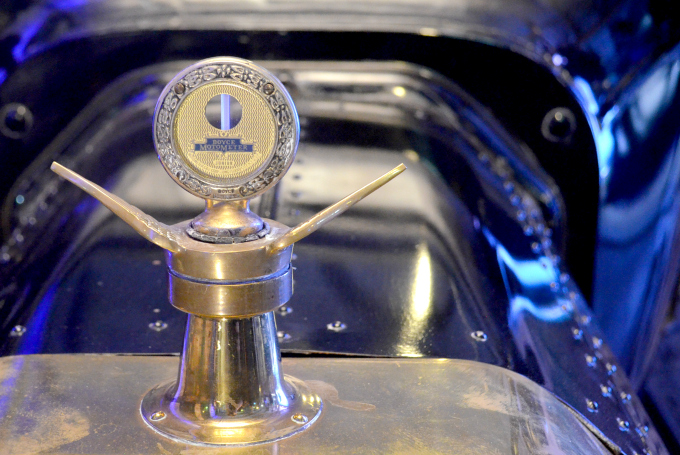 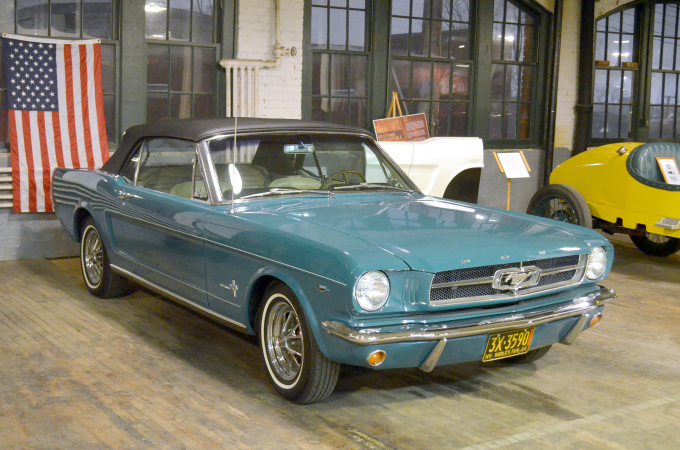 Day Two at NAIAS was the day! It was the day that we all got to see what was in store with Ford for the upcoming year! The day began with the official Ford press meeting at the Joe Louis Arena. Lights were flashing, smoke was billowing, and the rumble of engines was revving up the crowd. It was amazing to be there at the time that Ford announced their triple threat line up for the year! 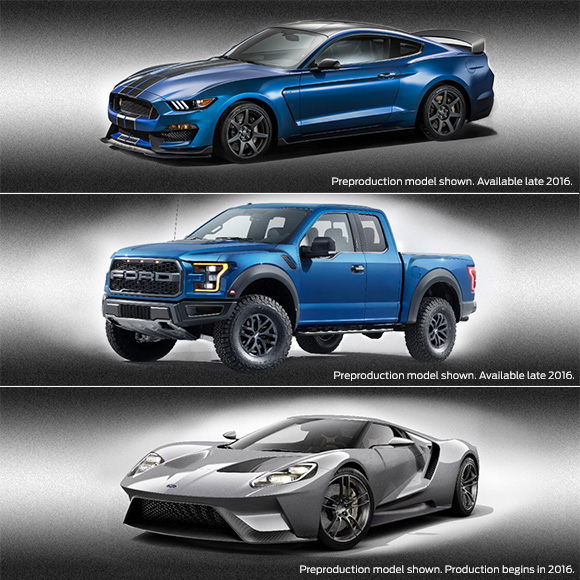 Ford is releasing not one but THREE new vehciles. The Ford GT, Ford Raptor, and ,be still my heart, in honor of the 50th anniversary of the Mustang, Shelby GT350R Mustang. All three releases, were enough to literally give me goose bumps. 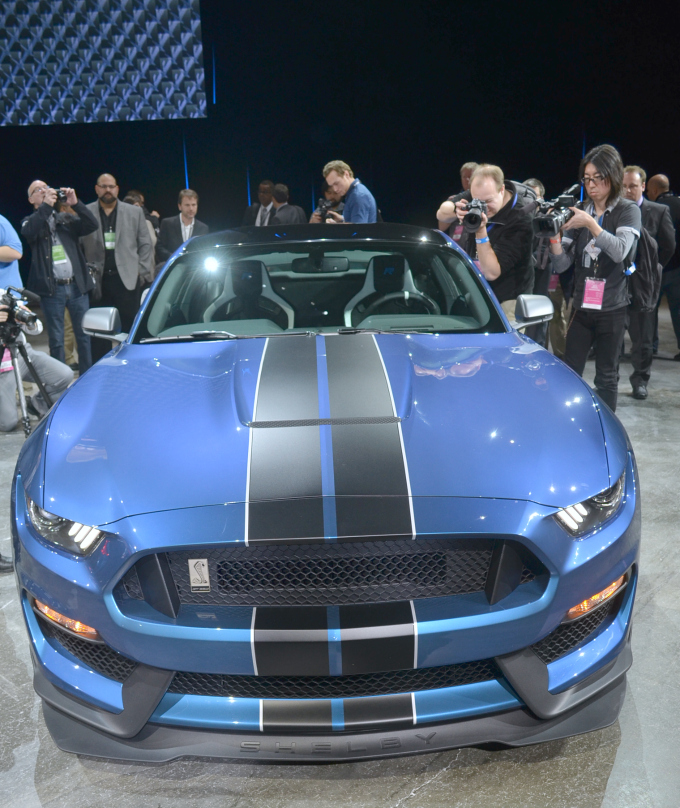 I’ve always been a sucker for Mustangs, and like half of America, fell in love with the 1967 Shelby GT Mustang thanks to the movie Gone in 60 Seconds. (I might’ve even considered Elanore as a name for my children) The Ford Shelby 350GTR Mustang was hands down my favorite car of the show. Well in the category of cars that I could actually own in this life time! It’s powerful, beautiful, and everything you would ever expect from a ‘stang.

The Ford F-150 Raptor is a new line in the F-150 series. It’s not as big as most of the F-150s, but it has all the power and traction to get down and dirty in the mud, snow (as in Minnesota), and whatever terrain you throw at it. This is a truck that the husband and I are seriously considering because we are looking for property in the country. When you live in the land of ice and snow, you need a truck with power and 4WD! When I saw the Raptor, I forwarded the info to hubby so he can take a look at us getting one for when we live in the boondocks! No getting stuck in the mud and snow for this mama. 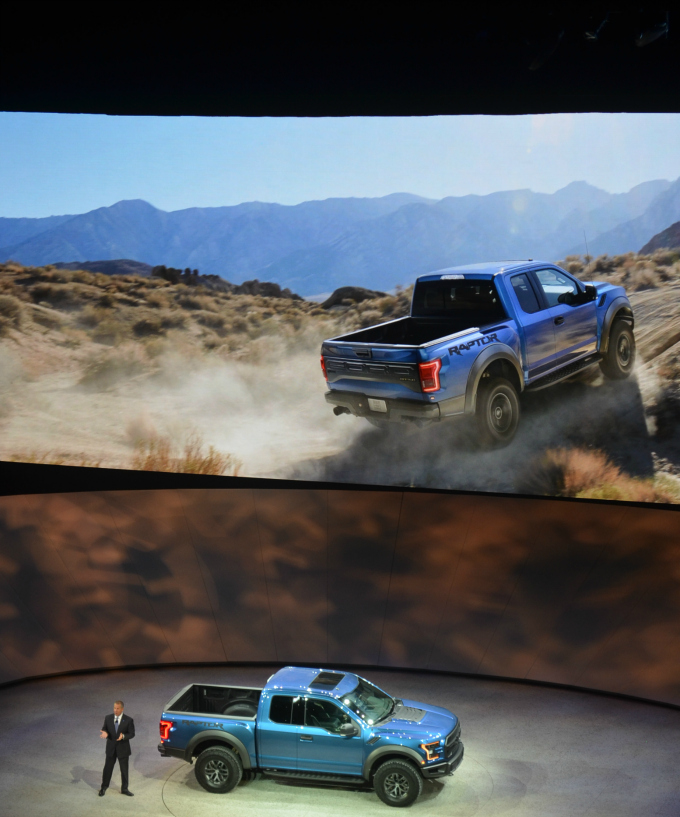 For the family, it’s a great truck because it has a row of bench seating in it and accommodates five people. The truck bed is big enough to handle groceries, camping gear, and whatever else you need to haul.

The third release was the Ford GT. There are no words for this car. Bloggers and auto industry experts alike have dubbed it one of the hottest cars at the 2015 NAIAS auto show. There may or may not hav been pipe dreams had when drooling over this vehicle. Me, the open road, wind in my hair, and a world where I don’t get car sick at fast speeds driving the Ford GT like a pro. Since none of that will ever happen, I had to settle for Ford’s last big announcement.

The last big announcement from Ford had me all geek girl giggling. We found out that Xbox and Ford teamed up together to have the new Ford GT to be the feature vehicle in the next Forza 6 game coming out for Xbox and Xbox One. We own Forza 5 and it’s a really fun game. Let’s admit it. This is probably the closest I will ever get to driving a Ford GT (sad panda). 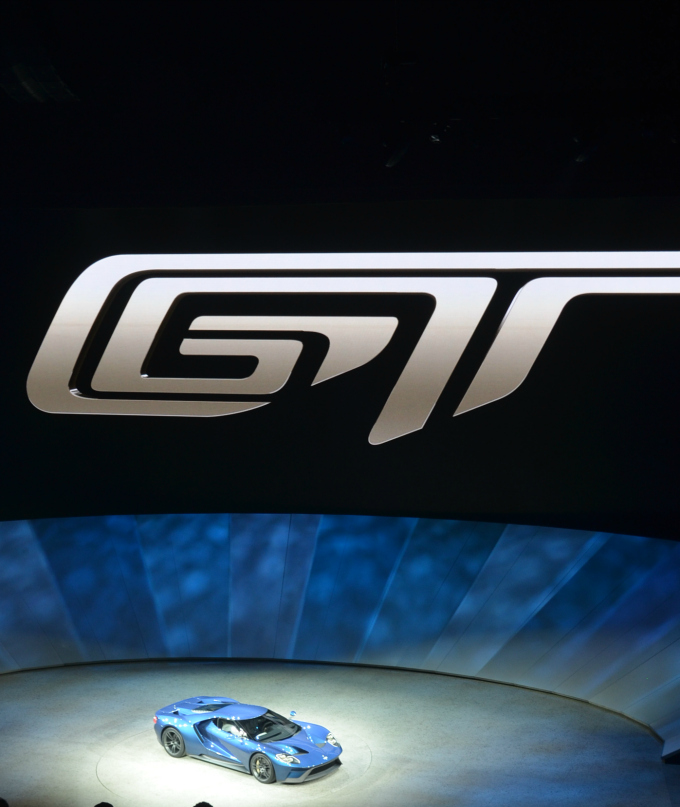 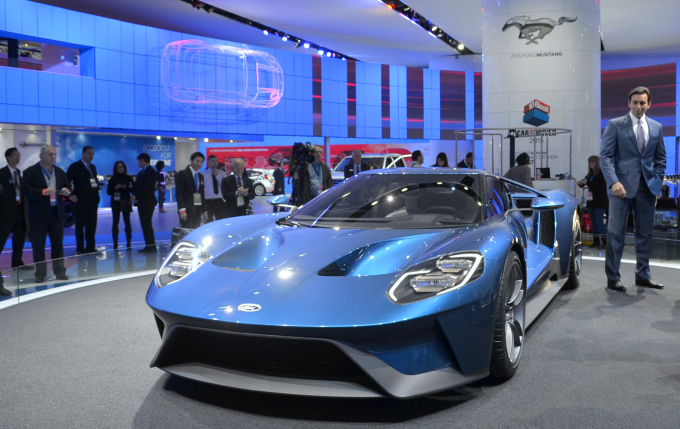 As the show drew to a close, we were even honored with a meet and greet with Ford CEO Mark Fields. It was really neat to hear him talk about his 25 years at Ford and his passion for the drive and innovation that Ford stands for. He earned further street cred in my book when he said that “Ford considers bloggers a strong, vital voice to get messages out…not an afterthought.” There were never truer words, and it was really refreshing to hear someone that is one of the top executive in auto industry that gets the value of bloggers. 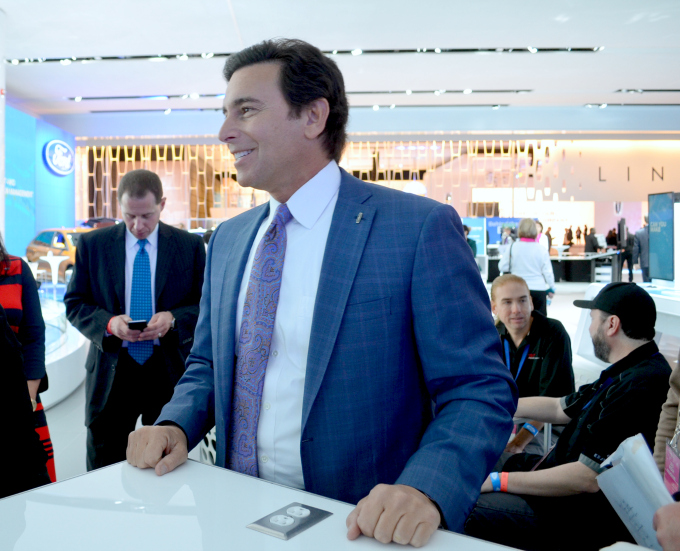 This was my first time at the North American International Auto Show, and it was truly amazing. It was an honor to be invited by Ford to attend the event, and get exclusive access to he Behind the Blue Oval Ford Press lounge. Listening to the lastest Ford Trends, seeing the hottest new Ford releases, and meeting Ford enthusiasts from around the world were life changing experiences.

Love this post? Check out  other great posts from Ford: 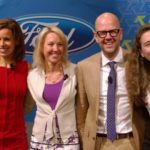 Previous Post: « Gluten Free Hair Dye: How to Repair Damaged Hair in One Step
Next Post: Take the Martyr Out of Motherhood: 10 Tips for Real Life »