This is a sponsored post written by me on behalf of Beneful Brand Dog Food for IZEA. All opinions are 100% mine.

What a better way to celebrate National Dog week, than to formally introduce our new Pug puppy, Sapphire! We’ve had Sapphire about three weeks now, and it’s already like we’ve had her forever. Before, I unleash the cuteness let’s tell a little tale about how she came to be apart of our family. 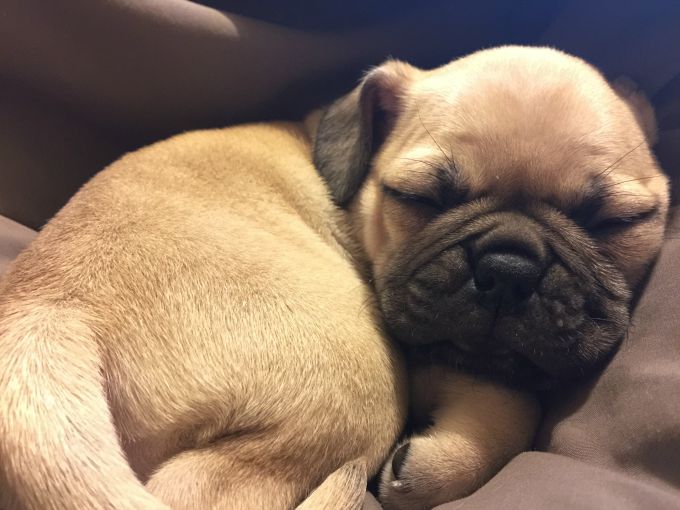 When we lost our bulldog at the beginning of the year, my husband and I agreed that having two dogs was good for our family until our kids were grown. We’ve had Karma and Happy for 2 and 3 years respectively, so we still had a good ten years of puppy parenting to go. Those two are such hams that we didn’t think that we wanted to add any more  chaos into our lives.

Well, that thought only lasted about two months. After about two months, hubby began not so suddenly hinting that we should get another dog. By subtly, I mean he started texting me pictures and Facebook messaging me Craiglist’s listings for adorable puppies.

One thing I have learned about my husband over the years is that he is persistent, which in some cases is a good thing. (It is how he finally ended up landing me as his wife) Despite me fluffing him off about getting another dog, he kept dropping the hints and dropping the hints. Somewhere along the line, I let my guard down and let it slip that I like pugs. They are just ugly enough that they are cute.  That is where my plan to keep only two dogs met its demise.

It was all quiet on the home front for a few weeks, and I thought the war for the new puppy was over. That victory was finally mine. Little did I know that the husband had set out to find a pug puppy, a little face that he knows I couldn’t say no to.

At the end of the quiet two weeks, Wayne sent me a text with this face in it. It’s totally not fighting fair when you send THIS face! Could you say no to this face? I know I can’t 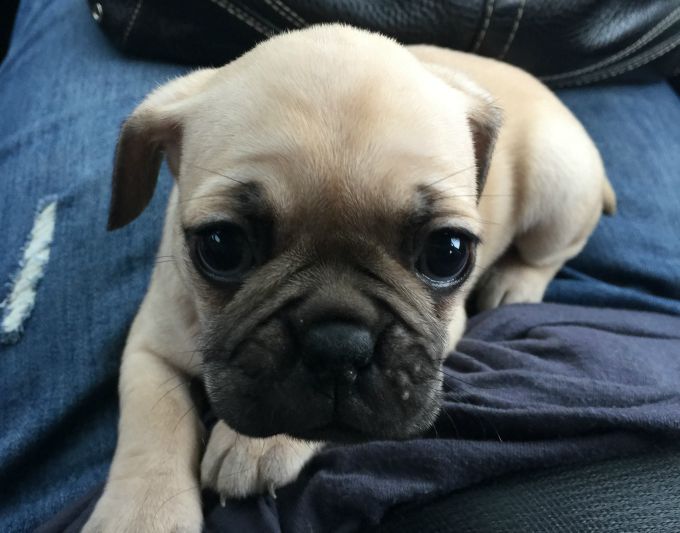 And that was how I lost the puppy war, with one little face! Now she’s a part of our family, and luckily all three of our dogs get along splendidly. It’s a dog eat dog world out there, and we are enjoying our cuddly fur babies, and love spoiling her and our other two dogs rotten.

What better way to celebrate National Dog Week than to officially introduce Sapphire and welcome her to our family. When she’s not trying to chew on my laptop  she loves bringing in large sticks and chewing them into smithereens. Her other favorite activities include sleeping, chewing on her big sister’s tail, and trying to make her big brother play with her.

Her other favorite activity is to eat. That puppy may be tiny, but man can that girl eat! She chows down on her Beneful so much that her little belly sticks out like a pot belly pig, and yesterday I caught her trying to finish off her brother’s breakfast too! (Little piggy) 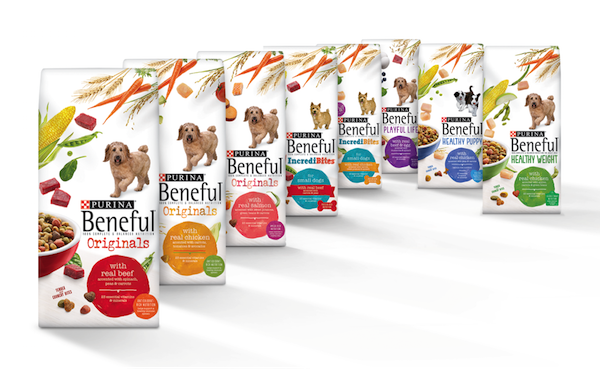 National Dog week is September 20th through September 26th (this week!) So, I challenge you to spend time with your fur babies, and let them know that you love them! You can also grab a $3 off Beneful Coupon here to save on their food too!Save $3 on Beneful here, and learn more about Beneful!

Previous Post: « 7 Reasons I Love Longmire on Netflix (And You Should Too)
Next Post: Watch Out San Francisco Here I Come #gooddinoevent »